Written by Christen Cole on April 4, 2022. Posted in Uncategorized. 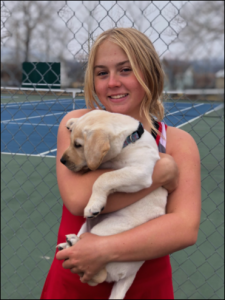 As an eighth-grader, Maddie came to Kristy Powell, the counselor at Three Forks High School and asked how she could get ahead. “She wanted to get started!” Maddie wanted to know if there was anything she could do over the summer before ninth grade. They wouldn’t typically place a freshman in MTDA courses, but Maddie’s focus and drive far exceed typical. After talking to her middle school teachers, Powell enrolled her in Geometry and Earth Science in the summer of 2020. Maddie earned A’s in both, before coming into the high school as a Freshman.

She has continued to take two-three MTDA courses each term, many in the sciences and health sciences as her future career interests lie in medicine. Maddie also enjoyed the chance to take creative writing and journalism, both helped her develop different writing skills from her regular English classes. “I was looking for more of a challenge from my classes, as well as a way to get ahead,” said Maddie. MTDA gave her the opportunity to take classes she wouldn’t have been able to take otherwise. “And the connection I had with teachers was like nothing I had ever had before.”

Maddie’s strategy, which she would encourage other students to do as well, is to email each of her teachers at the beginning of the term to introduce herself and tell them a little bit about herself. She has found the MTDA teachers to be very communicative with individualized responses. Other advice for students thinking about enrolling in a MTDA course would be to just try it. “Don’t be afraid to ask questions. It might feel intimidating but that’s what they’re there for and they are happy to help.”

In addition to her stellar academic performance, Maddie also competes for the school tennis and speech teams,  placing second in state in speech (class B) this year as a sophomore.

Three Forks has a significant number (almost 20%) of their students enrolled in original credit courses with MTDA. Their administration is happy to be able to give students more academic options.

“Big picture, I am so thankful to MTDA for opening doors. My school only offers two or three AP courses, MTDA has put me a step ahead and better prepared me for college.” Maddie is interested in psychiatry and psychology and plans to study biology or health science in undergrad before going on to a physician’s assistant program.